The ballet was wonderful and the masquerade was even better. One might say the combination was… awesome? By far the best partynight I ever spent in Stockholm. We kept going until 7.30 in the morning, its a special feeling going out in masks, we loved it, the suburban party kids in the white bar did however not. 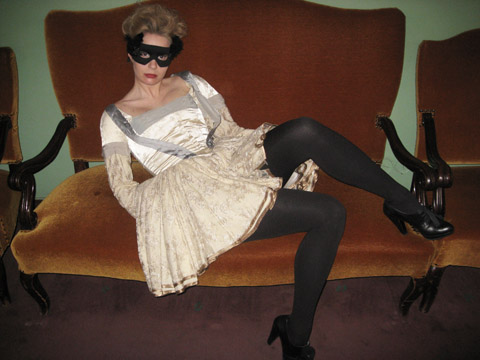 Corky looking her best, as always 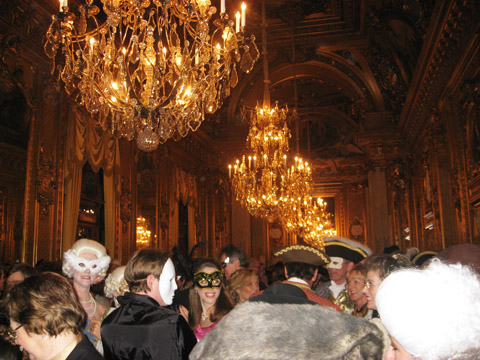 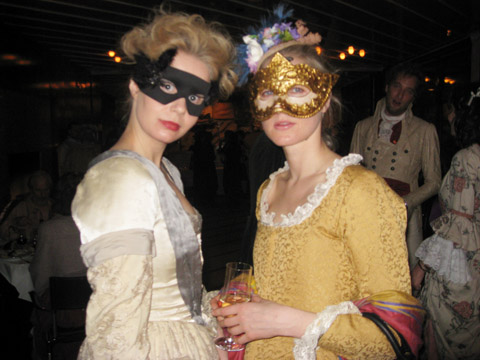 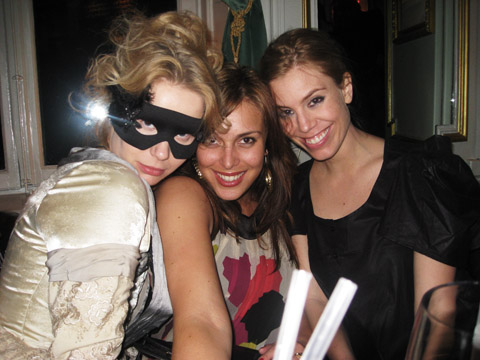 Corky, Celia and Paulina, very late in Gubbrummet at Spybar

To do tomorrow:
-Develop images from the masquerade (yes, we had a drink in the studio before the ballet, and yes, its very funny posing in costumes)
-Get a campaign ready. (5 images in post)
-Get a beauty story ready (8 images in post)
-Get a cover ready
-Book a meeting about a campaign
-Write invoices (and hunt people who doesn’t pay)
-Prepare a meeting on Thursday.

Tomorrow will be a long day.

I had totally forgotten about these, a collaboration with stylist/set designer Stina Persson Helleday from last winter. We looked at runway shows and interpreted them as still lives using fabrics and paper. In retrospect it sort of feels like a homage to early runway illustration. 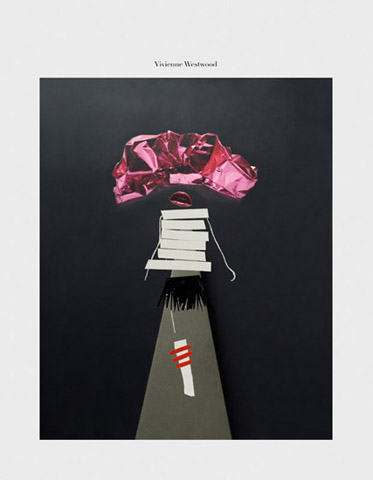 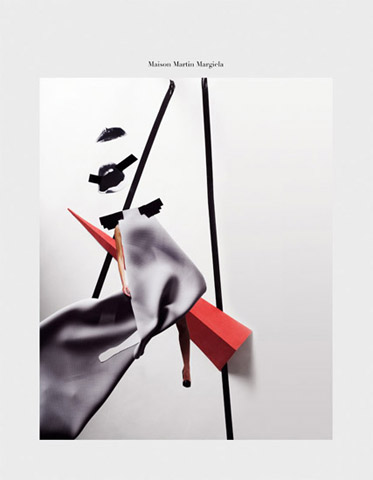 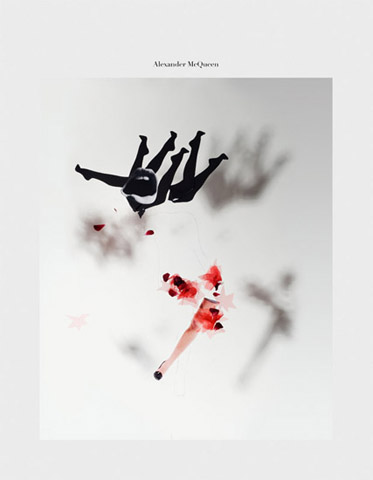 This Saturday me and Corky are going on a masked ball at the royal opera in Stockholm. 18th century clothing and a ballet, IÂ´m definitely aiming at something Casanova-ish. Will do my best to bring a camera. Stay tuned for an update.

Flipping through the new Self Service while baking bread and is in a state of chock. It so brilliant it hurts, every page is like a September issue in it self. Damn. Im so impressed I actually feel confused.

Found this creepy animal crawling on a wall in the studio while I were shooting yesterday. Freaky! 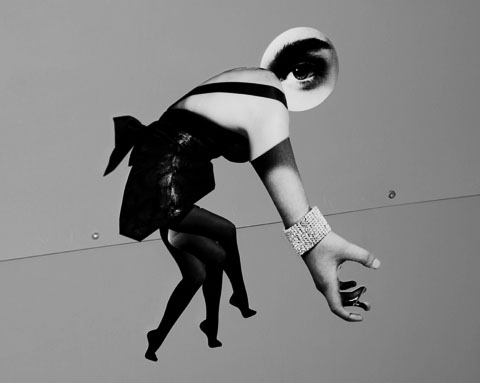 Went to the release-party for the new issue of Man about town on Thursday. I really think they are on to something, it feels both dirty and clean at the same time, the paper being sort of rough while a lot of the photography is clean. Maybe its an inverted version of Terry Richardson’s photography on glossy paper. DonÂ´t get me wrong, I like both, the outcome is totally different though. Well done by Saturday.

Today is probably the first Sunday this year that I spend at home. Went out for a meeting this morning and will work from home of course, but still. Feels kind of good… Corky is having brunch at Berns with her bridesmaids and Im doing research, drinking coffee and listening to the radio.

To doÂ´s:
-Retouch 8 beautyshots
-Retouch 7 still lives
-Shoot 2 new beautystories tomorrow
-Shoot a cover sometime this week
-Take time to see the exhibition at Moderna
-Work on my own exhibition
-Meeting at the bank tomorrow
-Get Corky a Easter-present (never heard about Easter-presents before, donÂ´t think its a setup though since everybody seems to be expecting presents for Easter.)
-Follow up on planned campaigns, when are we shooting really?
-DonÂ´t forget the meetings on Tuesday.
-Find the perfect excuse to work through the holidays.

So. Me and Corky bought an apartment today on Mariaberget in Stockholm.
So. I have a meeting tomorrow Im really looking forward to.
So. Madelaine is playing at Tranan tonight.
So. Im in post production with one of the best shoots I have ever done.
So. Im alone in the studio. Both Johan and Hans are abroad so I have no one to talk to.

Im a second away from exploding. Did anybody say Champagne Supernova*? Yes you did, didn’t you.

*The feeling is very similar to that one in the OC ep 14 when Seth is hanging upside down from the roof in a Spiderman mask and Summer comes running through the rain after dumping her boyfriend on the airport. And they play Champagne supernova. Oh, I have the heart of a fourteen year old girl. DonÂ´t tell anyone.

We organised a dinner, Corky & I, in the studio last December. Corky built a still life out of my old frames. 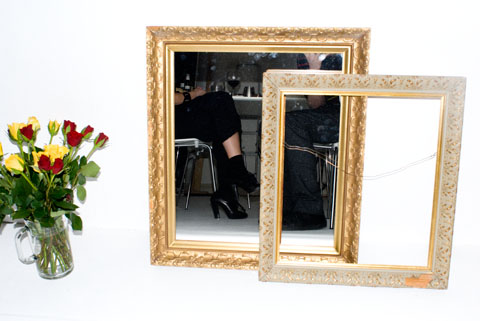 Blog gets hijacked by Corky:

I feel so protective regarding the little girl on that picture that you posted. She was so fragile, full of believes and dreams. On bad, sad days like the song from the new HÃ¥kan HellstrÃ¶m record which is, roughly translated, called To Late for Edelweiss (the record that is), the song is called Love is a letter sent a 1000 times and goes a little something like this…
(You should really check it up btw, swedish speaking or not.)

Higher heels, may be so â€“ less fragile too. But as full of dreams and belives as ever before.

Found an old scan from a lomonegative that was taken years ago of me and Corky while we were still in school. The Swedish art-school Konstfack had just moved to new facilities and we were there for lectures. We listened to a woman who did projects where she photographed places that people had died in, often violently or by neglect, she came in with the forensics. And yes, it was pre CSI.

The image made me happy (of me and Corky, not of the dead people), its a reminder that we still are just as ambitious now as we were then, and that it pays off. Its funny how different we look though, guess its more about bow-ties and high heels nowadays. 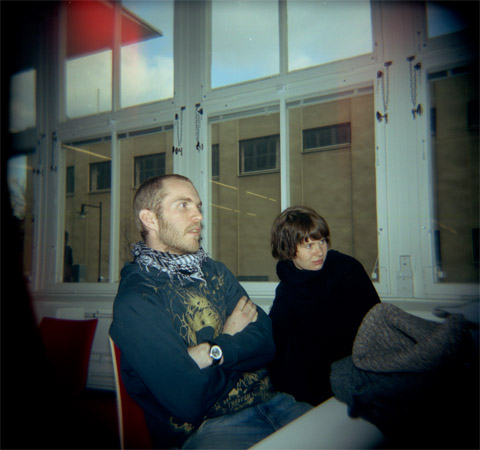 Scenes have always fascinated me a lot. The art-revolution with cubism overlapping the English-speaking literature revolution in Paris around the 20Â´s is a personal favourite. Might be the good memories of going down to Shakespeare & Co for books in the spring of 2005 and the dreams of Sylvia Beach with friends. The only point of reference, besides the remarkable work produced, being the books on and about Sylvia, Gertrude Stein, Picasso and those.

Im currently reading POPism by Andy Warhol and Pat Hackett which covers the pop era from 1960-1969. Its remarkable to think about the meetings between the old abstract expressionists and the new pop artists in galleries and happenings. And as Warhol described it, they all seemed to have met one another to discuss and criticise. Its puzzling to think about what makes a scene, and what holds it together. Surely the winners, if one can call it winners, will be defining and most importantly describing the scene to the world after its been accepted and when doing that the observer will most likely get their view on things. What I wonder most is to what extent the participants know that they are in a scene, can they feel the borders, where it ends and how many people it contains.

Another interesting thing is what happens today concerning locations. In the past, I have the impression, scenes were often concentrated to some extent by a location. Be it a street, neighbourhood, bar, club or else. Will the internet be regarded as a location in that sense by later generations? or will it consist of different local groups tied together by internet creating a scene as a whole. Maybe scenes as history saw them are dead.

Ps. Corky is by far the greatest.